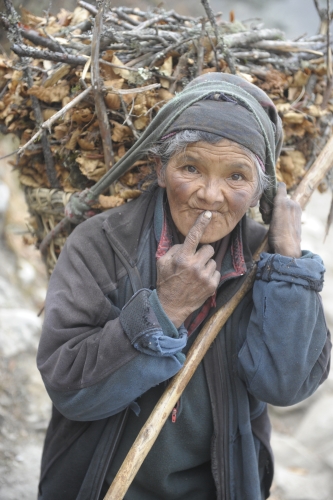 Carrying a backpack during races in Nepal

On the paths of the sky…

Spreading over thousands of kilometers, trails cross rivers, follow valleys, link villages together, and culminate at more than 5,000 meters above sea level. 18 millions walk every day on this incredible pedestrian network. There is a whole life on the paths of the sky. Men, women, children, everybody carry stuff on the trails.

For the pioneers of adventure running in Nepal like British brothers Richard and Adrian Crane in 1983, or the Frenchmen Paul-Eric Bonneau and Bruno Poirier in 1994, carrying a backpack with their own equipment was very important. Vital as well as philosophical, the idea was to adopt the way Himalayan people live and move. Not to identify to them, but to facilitate dialog and exchange on the paths. Since the first Annapurna Mandala Trail in 2000, the rule was “running around Annapurna, in the Nepalese Himalaya, with a backpack and the local hospitality as the only assistance”.

Benoit Laval participated at least twice to Annapurna Mandala Trail (2nd in 2009, 1st in 2010). To the question “with your long experience of stage races, what do you think are the capacities one must have to succeed in this kind of race in Nepal?” he answered:

“One must be resilient, adaptable, and able to bear local food and specific race conditions. As an example, during the first stage, we had 20 cm of powder snow at Annapurna Base Camp, very hot weather in the stairs of Chomrong, and a hailstorm in the last climb in the middle of terrace fields. Mandala is also a race where one should be fast whilst thinking about the next stage. Managing the equipment is also key as runners carry everything they need in a 30 liters backpack! The lighter your bag is, the easier it is to run. We experience the same situation than most of the Nepalese and realize we actually need very little to survive… You realize that as soon as you can buy food everyday, you can easily manage with only a 7 kg backpack. The Mandala is a way to come back to the essential simplicity of life and running. This is why it makes sense to carry your equipment, it brings you back to the roots.”

On Annapurna Mandala Trail, Everest Sky Race, and Himal Race, runners carry all their equipment throughout the race, as well as necessary food for the day (gels, fruits, energy bars and drinks) for those who don’t want to buy basic food available on the way (chocolate bars, soda, dry fruits).

Runners also carry all their clothes, toilet set, and everything they need.

For Himal Race, given the total length of the race (850 to 950 km) and the number of stages (20 to 25), supplies bags including food, clothes, shoes, drugs, etc. are made available by the organization every 4 to 5 stages.

It is also possible to participate to the races organized by “Chevaliers du Vent” as walker. Unlike runners, walkers have porters carrying most of their gears.

During the course of the race, walkers may switch to runners’ mode and start carry their equipment. The walker is then considered as a runner by the organization, using his/her cumulative walking and running time, and taking into account the number of stages completed.

It is not rare to see walkers switching to runners’ mode or runners switching to walkers’ mode. The goal is to allow everybody to enjoy the race the way they feel, so that they take the most of the event.

Annapurna Ultra-Mountain is the only race where runners only carry a small bag, as it is the case in most single stage trail running races and ultras in Europe.